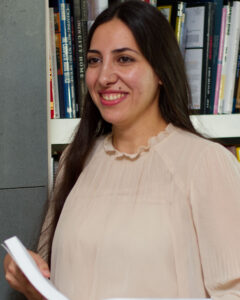 Areej completed her Bachelor of Architecture in 2014 at Damascus University in Syria, followed by a position there as an assistant teacher teaching Design III and IV. In 2019 she earned her Master of Science in Building Design on a full scholarship at Anadolu University in Turkey.  She is a founding member of Young Syrian Urbanists and an author for Urbegony Architecture – Education without Borders – Syria. Areej joined the CDA team in the spring of 2021 with a total of 6 years of design experience. She speaks three languages fluently (English, Turkish & Arabic) with basic conversational knowledge of French.

Where did you grow up? I grew up in Damascus suburbs, Syria.

Which degrees do you hold and from where did you earn them? Master’s Degree in Building Design from Anadolu University, Turkey, and Bachelor’s Degree in Architecture from Damascus University in Syria.

How many languages do you speak? Three languages: English, Turkish and Arabic. Beginner level of French.

Have you earned any awards and, if so, what are they? 3 awards: European Erasmus+ internship award, Turkish scholarship award (full scholarship for Master’s degree), and Appollodorus of Damascus honorable mention award.

What are you most thankful for? I’m blessed to have very supportive parents, husband, two brothers, one sister and my beautiful daughter.

Where have you lived? Syria, Turkey, Spain and finally in RI, USA.

Have you been involved in any community projects? I participated in educational non-profit organizations concerned with the living environments in Syria.

What are some of the jobs you have held? Co-author, assistant teacher, and architectural designer.

Warren Buffet wants to give you a million dollars to start your own business –what business would you start?

An old-Damascene style restaurant in RI, so I can design and create an environment where all the senses (the texture of natural limestone, smell of Naring trees and jasmine, relaxing sound of the water fountain, the direct penetration of light from the sky through the opened no-roof central yard, the sound of Oud instrument playing, and the extraordinary taste of Syrian food) become nested altogether.

What is your favorite hobby? I love swimming and drawing.

BACK
NEXT
Scroll to Top